Marie Campbell, assistant director of education at Scarritt-Bennett, holds a sign reading, "Black Lives Matter" at a demonstration in Nashville to show support for immigration reform and racial justice

The continuing struggle against racism in the United States — which occupied United Methodists in protests, prayer and peacebuilding — was the biggest story in the denomination in 2015, according to a United Methodist News Service poll of communicators. 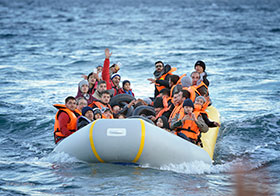 Church communicators chose the continuing struggle against racism in the U.S. as the top United Methodist news story of 2015, followed by the migrant crisis, the church debate over sexuality, Ebola and the rise of licensed local pastors in the church. View a slideshow of all these stories.

That struggle received 16 first-place votes out of 26 ballots cast by church communicators in the United States, Africa and Asia, along with news-service staff. The denomination’s response as hundreds of thousands of migrants continued to flee Syria, Iraq, Afghanistan and various parts of Africa for Europe, was second, followed by the denominational debate over sexuality. The lingering Ebola epidemic in Africa was fourth and the rise of licensed local pastors in The United Methodist Church rounded out the top 5.

First: The struggle against racism

In cities around the U.S. — including Baltimore, Cleveland, North Charleston, Staten Island and Chicago — where young African-American men died at the hands of police, United Methodists called for justice and an end to racism.

“It is not enough for us to remain silent. We’re dealing with principalities and powers, I believe,” Bishop Warner Brown Jr., told the Council of Bishops in May in an emotional address. The council unanimously issued a pastoral letter that affirmed that “all lives are sacred and that a world free of racism and xenophobia is not only conceivable, but worthy of our pursuit.”

The Rev. Cynthia Moore-Koikoi joined other clergy in a march for peace on April 27 as riots broke out across Baltimore after Freddie Gray died of a spinal cord injury suffered while in police custody.

“When we pray, ‘Thy kingdom come, thy will be done on earth as it is in heaven,’ we are committing ourselves to the work of community building,” said Moore-Koikoi, superintendent of the Baltimore Metropolitan District of the Baltimore-Washington Conference.

Methodist leaders in Europe called on their countries to welcome refugees.

“The right of individuals from all countries to ask for asylum is under threat,” said United Methodist Bishop Rosemarie Wenner of Germany. “We as people of faith have to make use of the fact that the reality proves the failure of the current regulations to work not only for humanitarian aid but also for more just procedures for those who come to Europe.”

After Nov. 13 terrorist attacks in Paris killed 130 and provoked a political backlash against refugees that included efforts by U.S. governors to block resettlement of Syrian refugees in their states, United Methodists called for compassion.

Bishop Gary Mueller of the Arkansas Conference said of efforts to ban Syrian refugees that it “solves nothing to categorically exclude a group of people whose lives have been torn apart.”

In the Great Plains Conference, at least 35 United Methodist churches agreed to sponsor at least one Syrian refugee family, while church efforts to resettle refugees in New Jersey continued.

Bishop Patrick Streiff, who oversees the small number of United Methodist congregations in France as the episcopal leader of central and southern Europe, pointed to his horror over “the depth of violence despising human lives” and to his conviction of the need to follow the model of Christ as peacemakers.

The denomination’s debate over sexuality intensified in the wake of the U.S. Supreme Court decision legalizing same-sex civil marriage in all 50 states.

While the ruling did not change church law, which prohibits pastors from conducting and churches from hosting “ceremonies that celebrate homosexual unions,” it fueled the debate at annual conferences.

The Great Plains Conference representing United Methodists from Kansas and Nebraska, voted to ask the 2016 General Conference to acknowledge there are “diverse beliefs regarding homosexuality,” as well as to eliminate restrictions on homosexual clergy and penalties for officiating at same-sex marriages. The Rev. Rob Schmutz, United Methodist Church at Park City, Kansas, who spoke against the petition and surrendered his ministerial credentials to Bishop Scott Jones after it passed.

Baltimore-Washington, Virginia, Northern Illinois, Greater New Jersey and the Desert-Southwestconferences voted to delete language saying homosexuality is incompatible with Christian teaching from the Book of Discipline. These and other conference proposals could be considered by General Conference when it meets in Portland, Oregon, May 10-20, 2016.

The denomination’s top lawmaking assembly will also receive other sexuality proposals, including theThird Way plan from the Connectional Table, the Covenantal Unity Plan and proposals for how delegates might better discuss sexuality-related proposals.

A complaint against retired Bishop Melvin Talbert for officiating at a same-sex union ended with a just resolution. Other resolutions on same-sex marriages in 2015 included two clergy in Virginia who were suspended. Cases also were resolved in Tennessee and Iowa without trials.

But in Michigan, the Rev. Michael Tupper refused to sign a just resolution, saying he would plead guilty at a church trial and would not contest any penalty determined by a jury of his clergy peers. His hope is that his case will spotlight what he sees as an unjust church law.

African bishops called on the denomination to hold the line on church teachings that affirm sexual relations only in monogamous, heterosexual marriage.

Conference communicators and editors, as well as United Methodist News Service staff, vote each year on what stories were the biggest news in the denomination.

The effects of Ebola are lingering, too. With adisproportionate number of health care workers among the dead, there could be a sharp rise in maternal and infant mortality.

Liberia began reinstating routine vaccinations of children, suspended during the outbreak for lack of resources. The United Methodist Church in Liberia launched a campaign to monitor Ebola orphans, who are at-risk for human trafficking.

In both Liberia and Sierra Leone, the church officials worried about the disease re-emerging as well as how the church helps in recovering from an outbreak that closed schools and devastated the economy.

The United Methodist Committee on Relief and its partners are now working to address the long-term effects of the epidemic by strengthening the healthcare capacity in West Africa.

Fifth: The rise of local pastors

Local pastors — non-ordained, and in most cases without a seminary degree — are growing in number and taking on more roles in The United Methodist Church.

The upward trend with local pastors comes as ordained elders are becoming rarer.

The denomination's General Council on Finance and Administration reports that from 2010 to 2015, the number of ordained elders and provisional member elders serving churches dropped from 15,806 to 14,614. Though the denomination was shrinking in the United States, local pastors appointed to churches climbed from 6,193 to 7,569 in that time. Both full-time and part-time local pastor numbers grew, with the latter growing faster.