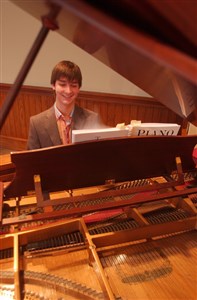 — Jonathan Szymanski found refuge from Hurricane Katrina at a piano in .

The temporary resident is making the best of a bad situation by offering his musical talents at local weddings, in recitals around town and every week at . The rest of his family has returned home to the , but 18-year-old Szymanski is biding his time here with friends until he heads to in to begin his freshman year.

“I knew I wasn’t going to school and this would be a way to do something good for people because this is my new home,” he said.

Szymanski started making the rounds of churches in in early September and dropped off his credentials CD for Lori Blount, choir director for the Methodist church on . “I saw his resume and put on his CD and knew I immediately needed to get him on board,” she said.

He’s been the pianist for Sunday services since she hired him Sept. 15. “I’m just amazed at God’s timing. It couldn’t be any better,” Szymanski said.

To recognize Szymanski’s talent, the church is offered a concert Nov. 16 in the church sanctuary. “He’s been a tremendous blessing to our congregation. I asked him to do this recital because our people are loving his playing,” Blount said.

Without the wrath of Katrina, Szymanski said he never would have found . “I look at this as an opportunity. I had never been to ,” he said. “All this (hurricane and aftermath) is not my choosing but ... I feel blessed with the opportunities.”

Szymanski moved from his family home in into his dormitory at Loyola on Aug. 26. With the weather reports about the forthcoming storm’s increasing intensity, his parents returned the next day to pick him up. The storm hit Aug. 29. “I moved in that Friday, left Saturday because of the storm, came here that Tuesday and then found out our house is a slab.”

His house right off the beach is gone.

“It’s a war zone. There’s a barbed wire fence around my house,” he said.

His prized piano, which had been in his family for generations, is gone. “We found it 600 yards up the street in a canal that didn’t exist before,” he said.

His uncle found the instrument and literally called in the National Guard to retrieve it. Several soldiers helped pull it out of the muck.

“Even though I had known the house was gone, I was still holding out hope for the piano,” Szymanski said.

But the antique grand piano was in no condition to be saved. “My dad’s car was in the same canal totally crushed with an oak tree through it.”

The musical compositions he’s written since he was in middle school and his collection of sheet music are gone, too. “I put all my music in garbage bags and put them on top of the piano, and look at the piano.”

Some of his songs, including one that won a state contest and placed fourth in a Southeast regional competition, he remembers. “I have remembered some. The others may come back later.”

Szymanski started playing the piano at age 7 with an ulterior motive. “My parents said I could take karate if I started out with the piano. So I said ‘Sure, I’ll take piano.’”

The karate was long ago left behind as Szymanski discovered his musical talent. “Fifth or sixth grade was when I started getting pretty good.”

On the coast he served as pianist and accompanist at several churches and for his school choirs and productions. He plans to return in January to Loyola, which is closed this semester. He has music and academic scholarships there. Szymanski is looking to the recording industry for his future. “I hope to write music electronically with the computer as my instrument.”

This story appeared in the Nov. 15 issue of the Madison County Herald and is used with permission.