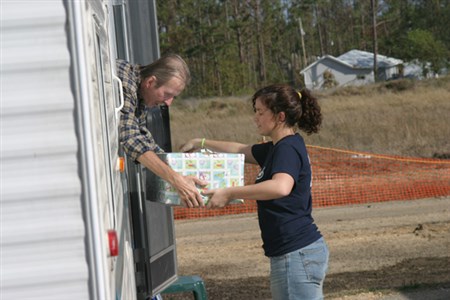 United Methodist Youth made sure some victims of Hurricane Katrina don’t miss out on at least that part of Christmas this year.

About 40 youth from around the Mississippi Conference on Dec. 3 delivered nearly 200 “Christmas boxes” to hurricane victims living in trailers provided by the Federal Emergency Management Agency. In addition, the young people brought toys, games, books, clothes, food and other items to the .

“This was a way I could give back to my brothers and sisters in Christ,” said Taylor Ivey of . “This was an opportunity to help people who are going to have trouble this Christmas season.”

“Bishop (Hope Morgan) Ward asked me to put something together for the youth to do on the Gulf Coast and suggested the Christmas boxes,” said the Rev. Roger Shock, associate pastor at Meridian Central United Methodist Church and conference youth coordinator. “She had seen this done in following a storm up there.”

Shock and Stephen Bishop, youth director at Crystal Springs UMC, met with youth directors on the to propose the plan. District youth coordinators were asked to promote the plan.

The Senatobia District showed the strongest response by assembling some 175 Christmas boxes. Other districts provided gifts, clothes and food for the storm victims.

“As soon as we got together and talked about it, I put out an e-mail, a flyer and started a phone tree,” said the Rev. Ron Schwake of Senatobia First UMC and district youth coordinator. “The source of the biggest response was the little churches that wanted to help the youth. The big churches did their part, but 10 boxes from a little church are significant.”

Schwake pointed out that all churches that participated added the project to their Christmas plans instead of dropping something else. Schwake said he went on the Internet and contacted a company that agreed to provide the boxes at cost.

John Hudson of Jefferson Street UMC in said members of his church contributed several hundred dollars toward the project. He talked to the local Wal-Mart and was able to buy a large number of toys at discounted prices, which increased the church’s buying power.

Most of the youth arrived on the coast Friday and spent two nights at Gulfport First UMC. Teens from Senatobia left their city at Saturday to take part in the event.

When all the youth had arrived on Saturday, they drove to Waveland to begin the distribution.

The first park, which contained about 100 trailers, was located on a ball field next to an elementary school. The concession area was turned into a toy store. Hundreds of children’s books, food, clothing and other items were spread around the field’s backstop.

Meanwhile, the teens delivered the Christmas boxes to the trailers. At each home, they offered the box and told the residents of the items available at the concession stand. If the students’ knocks were unanswered, the box was left on the doorstep.

Starting slowly at first, residents began to wander to the concession stand and peruse the items. All those who came by seemed to appreciate the opportunity to select new toys, clothes and books for their children’s Christmas. Some brought their children along.

While shoppers selected items at that park, a group of students took Christmas boxes to another trailer park that contained about 50 trailers.

In about two hours, virtually all of the toys were gone.

“I have so many friends from the coast who were affected by the storm,” said Lacey Davis of Crystal Springs First UMC. “This was a way I could help them out.”

Lee Horne of Benoit Union Church in the Delta said he wanted to get involved when he realized how much he has compared to what hurricane victims need. “Every kid should get presents at Christmas,” he said.