Many of us have had the benefit of having a benefactor who has had a positive influence on us. If they are clergy or laity, their leadership has left a lasting impression on us for the duration of our faith journey. In the story below, we learn how one man's devout servitude and love for all led to the success of an impoverished young man who took those lessons to heart. The story behind the inspiration for the Dickson Order is an accounting of how being the hands and feet of Christ for one person can have an effect on others for generations to come.

When Judge W.O. "Chet" Dillard was a child, his parents surrendered him to an orphanage. It was the Depression, and times were beyond brutal for large families. There were ten children, and Chet was the youngest. He wasn't taken from them. They loved him enough to surrender him when they knew they couldn't provide for his basic needs. Food and water were hard to come by, and the family was often sick. The Depression had pushed them to desperation.

﻿So, the baby, Chet, was given a fighting chance when he was turned over to the "Baptist Orphanage." Chet was one of the lucky ones. He didn't stay in the orphanage for the rest of his childhood. His parents worked hard, and they managed to reunite the family and move to Pachuta, MS. It was there that Chet met the clergyman who would change his life. There, he met Rev. Nathan Andrew Dickson.

Rev. Nathan Andrew Dickson, or N.A. as he was called, was a clergyman inside and out. His faith was strong, as was his belief that all people were children of God. Everyone deserved God's saving grace, rich or poor, black or white.

He knew the Dillards were poor.

They were just good people trying to earn a living, and Rev. Dickson saw something in the youngest Dillard, something he knew needed to be nurtured. Dickson told Chet that if he could make his way to Hattiesburg and Parkway Heights UMC, where he was serving when Chet graduated from high school, he'd help him any way he could.

With all his belongings carried in one brown paper bag, Chet Dillard made his way to the Parkway Heights parsonage where N.A. Dickson and his wife opened the door to their home and their lives to him. The little parsonage was crowded, to say the least, but the Dickson family provided. Chet Dillard was clothed and fed, his mind cultivated and taught how to give back. He entered college with the blessing of N.A. Dickson and his family. Dillard credits the Dicksons for giving him a chance at life. That chance allowed him to become a Naval aviator, district attorney, Commissioner of Public Safety, and an open-minded, fair judge. He never forgot or lost touch with N.A. Dickson. They were family.

But Reverend Dickson's work was far from finished. He continued to serve the church and his fellow man.

﻿N.A. Dickson found himself serving Columbia UMC in rural Mississippi during the turbulent 1960s. He studied the Methodist Book of Discipline regarding the issue of keeping people of different races separated. He didn't see it there, and he didn't believe in it himself. He was ridiculed and belittled during the battle over segregation. But he stood firm with 27 others and signed a manifesto titled "Born of Conviction", emphasizing the stance of the Methodist Church on race, support for public schools, opposition to Communism, and endorsing the right to speak freely from the pulpit. It was published in the Mississippi Methodist Advocate in January of 1963. The backlash was substantial. Of those 28 pastors, 19 were terrorized and threatened to the point that they felt they had no choice but to flee from their churches, pulpits, and members. Rev. N.A. Dickson was not one of them. He stayed in the church and continued winning souls for Jesus.

N.A. Dickson entered the ministry in 1944 and officially retired from the Methodist Church at Annual Conference in 1983 after 39 years in ministry. But, he continued to serve the church through his later years of retirement, serving at Chapel of the Cross-Baylis Chapel until the summer of 1993. He served 26 churches during his years in ministry. Mary Dickson wrote of her husband in the 2000 Annual Conference Journal,

"N. A. Dickson had many talents, a big heart, was bold spirited, and possessed strong convictions. He was dedicated and committed to serve his family, fellow man, and his Lord and Savior, Jesus Christ. He was admired and loved by many, and touched us all."

N.A. Dickson died in the spring of 2000. His generosity and abiding faith allowed him to have an impact on more than just Chet Dillard. But Chet Dillard remembered the influence of Rev. Dickson in his life writing, 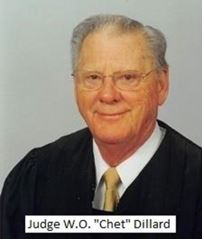 "His middle name was Andrew, the same as the Apostle called by the others, "the Bringer". All he did was bring his brother Peter, the little lad with the five loaves and two fishes and the Greeks to Jesus. He was just an ordinary man, but the Master saw something in him that others did not see.

He never wrote a book, was never elected to office, never became Bishop, or painted a picture. He just brought people to Jesus.

So was the life of "N.A," who took me into his home, clothed me, fed me and enabled me to enter college. I became a naval aviator, district attorney, commissioner of public safety and a judge because of the personal sacrifice of an ordinary pastor and his family."

N.A. Dickson's influence continues today through 'The Dickson Order', a special interest restricted endowment founded by Chet Dillard in 2002 to honor clergy of The Mississippi Conference of The United Methodist Church who have served faithfully and blessed the lives of individuals in the churches they have served. The income from the endowment provides scholarships for individuals enrolled in a seminary pursuing pastoral ministry.

Individuals, churches, or organizations wishing to bestow this honor upon a minister must make a minimum contribution of at least one thousand five hundred dollars ($1,500) to the fund. To be eligible for membership in The Order a minister must have served a minimum of twenty (20) years. Distinguished laity may be nominated for membership with the same contribution to the fund. At the time and place desired by the contributing party, a plaque will be presented to the recipient or their family. Another plaque will be placed on the wall at the Conference office. Scholarships from this Fund are awarded annually through the Methodist Foundation of Mississippi. 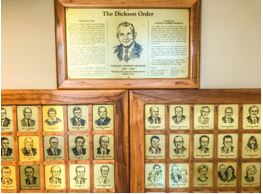 Induction in the Dickson Order is an honor bestowed on those who have had an impact on the church and have been instrumental in leading people to Christ. Most churches have at least one particular minister or layperson who has influenced them and/or their church.

Did N.A. realize that the impoverished young man taken in by the Dickson Family would be so successful as to start a fund supporting Mississippi clergy attending seminary? He likely saw Chet Dillard as the Savior did. He was a child of God, ready to follow Jesus and help others, leading the way to salvation. Chet Dillard's tribute to N.A. Dickson summed up his life with these words, "All he did was bring me and countless others to Jesus, but that was all we needed."