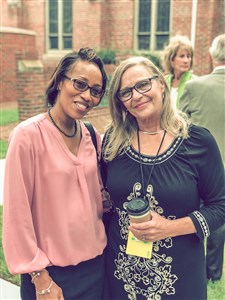 It was sometime between 1983 and 1986 and I was sitting in the choir loft of the church I attended in Nashville, TN while attending Vanderbilt Divinity School.  It was a “normal” Sunday service, until he walked in.  “He” was a person who, by the looks of him, lived on the streets.  He was unkempt and perhaps even intoxicated.  He came in and sat in a pew about halfway down.  The people around him began to stare and I could see them whispering to one another.  But, all was well, until the announcement part of the service. During that time in the service the pastor provided an opportunity for anyone who had something to announce to the church to do so.  That was when “it” happened.

The man who had made his way from the street to the pew that Sunday began asking questions.  Though I no longer remember the specifics of the questions, I do remember that there was nothing inappropriate about them – he was mostly asking about the church and faith.  However, it made the other people in the church that day very uncomfortable.  If fact, folks were so uncomfortable that the ushers came down and escorted him out of the church.  That was not a good day in the life of the church!

Now, for the rest of the story…The next week in several adult Sunday School classes the encounter was the topic of conversation and it was a time of sadness. It was also an awakening to the fact that we didn’t know how to greet a stranger.  Over a period of weeks and months the attitude and capacity for witness to the changing community around them transformed people – both within the walls of the church and without.

I share this story to remind us during this Holy Week that often we are no different than the people sitting in the pews in Nashville in the mid-80s.  We still are uncomfortable with “strangers”.  We sometimes teach our children about “stranger danger”.  We often walk across the street or change our path if we see someone who is different from us.  We still struggle with strangers in our midst.

In Hebrews 13:2 we find these words: “Do not forget to show hospitality to strangers, for by so doing some people have shown hospitality to angels without knowing it.”  These words from the author of Hebrews, as well as the verse from Matthew’s gospel, convict me of my sin of judgment that all too often overtakes me.  It is a challenging and sometimes dangerous world in which we live and yet, the Gospel still compels us to reach out to the stranger and invite them into the family of God.

My prayer for us today is that maybe we can all reach out to a stranger – whether it be a new colleague at work, a visitor at church, a person in the checkout line at the grocery store, or perhaps the person who just moved in down the road.  Maybe we can share the love of Christ with someone we don’t know and maybe, just maybe, the presence of the Living God will do a mighty work in all of us for the glory of His Kingdom!  May it be so!!  Amen.

Rev. Vickie White, Director of Communications and Connections Ministries for the Mississippi Conference of The United Methodist Church