I Saw the Light

"I am the light of the world.  Whoever follows me will never walk in darkness, but will have the light of life."  John 8:12

I recently returned from an amazing experience in Israel! It was my first trip there.  Thirty two of us, many of that number from our church, spent a little over a week exploring this sacred land.

I was struck by the natural beauty everywhere we went. Much of the northern part of Israel was already lush green with many colorful plants in bloom. Riding on a boat on the Sea of Galilee was a highlight.  So was visiting the ruins of many of the villages where Jesus healed, preached and taught.

We visited the Jordan River about halfway between the Sea of Galilee and the Dead Sea where the landscape began to turn brown. We remembered our baptism there on the banks of the river. We ventured down south of Jerusalem along the west bank of the Dead Sea where we explored the caves and ruins of Qumran.

I was a little deflated at the most popular spots in Jerusalem: where Jesus was born, where he was crucified, and where he was laid in a tomb. Why were these sacred sites a bit disappointing? Maybe it was the density of the crowds.  It was hard to reflect and take in the enormity of the place while at the same time being herded in a room overcrowded with people. Maybe the churches where these sites were found tried too hard to decorate and sell the site.  You could hardly see the cross where Jesus was crucified for all the gold decor hanging from the ceiling!  Yet, I still think back at even those sites and get chill bumps!

Below are two pictures I took which encapsulate my experience in Israel. While we were near the Dead Sea exploring the Qumran site, a huge, bright, full-arc rainbow appeared above the sea. Willis Britt, our able guide, had a hard time competing with it! He wisely stopped and allowed us to take it in. 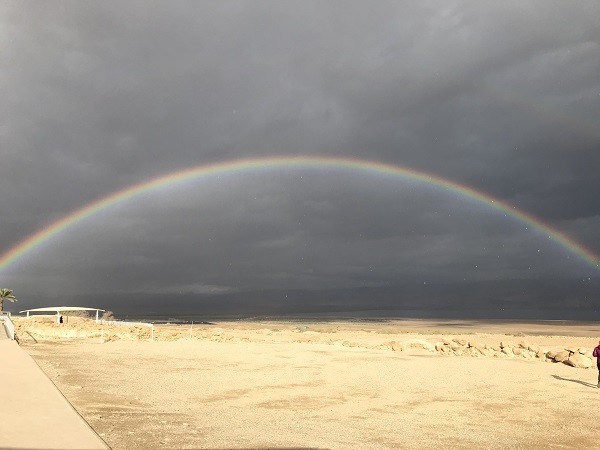 The next picture is at the top of the roof at the Church of the Holy Sepulchre. Below, amid the rush of the crowds jammed in to visit the site of the crucifixion and the empty tomb, two bands of light poured down from the windows at the top of the tower. 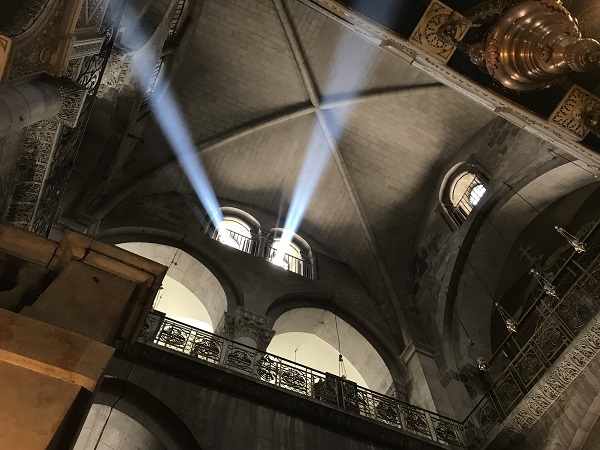 Both of these glimpses were fleeting, but they were powerful to me.  It is really hard to stop light.  It’s difficult to keep it out or seal it in. And though it was especially powerful while in Israel, you don’t have to get on a nine-hour flight to find it.

God’s light follows us in ways we hardly notice.  And the light of Christ in some sense makes all ground we are on, holy.  No matter where we are, no matter what we are doing, the light always finds its way to us. Lent reminds us that not even the darkest valley of suffering can keep it out.  It shows up in amazing ways as we get closer to Easter.  The light of Christ is upon us.  You’ll see it wherever you are if you know where to look.