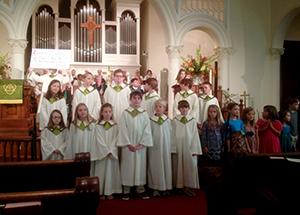 During a two-month giving campaign, the church that averages 550 worshippers each Sunday raised over $11,600, or as the Rev. Fred Britton, senior pastor, likes to translate it to, over 1,160 nets.

And since each net can protect up to four people, Britton likes to continue the math and to stress that the offering will protect up to 4,640 people from the preventable and treatable disease of malaria.

Two of the church's children set up lemonade stands in their neighborhoods to raise money for Imagine No Malaria (INM), this year's Mississippi Conference missions focus. 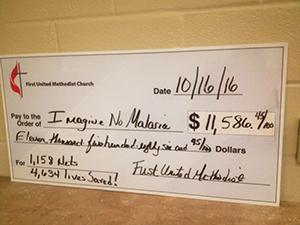 On the first Sunday of August, the congregation's "Promotion Sunday," Britton and children's director, Kristen Partin, displayed hundreds of INM red offering boxes, enough for each family to take one home.

One second-grader, after hearing a lesson in Sunday school about how malaria endangers lives of children ages 5 and under in sub-Saharan Africa, told his mother and grandmother before he even got home, "I want all my allowances to go into the red box for Imagine No Malaria."

One third-grader, whose mother is a public school teacher, took her red INM offering box to school with her and went classroom to classroom to raise money.

Partin, who has served at the Tupelo church for nine years, said they never suggested how the children could raise money for INM. "We never put ideas out there," she said. "This came out of their sweet, wonderful, giving hearts."

During the two-month campaign, Partin said the church leaders kept Imagine No Malaria before their people in the church newsletter, on Facebook and Twitter and in Sunday morning announcements. In addition, during September, Jarie Thompson, the church librarian, went to each children's Sunday school class and read "Little Things Make Big Differences: A Story about Malaria" by John Nunes, published by Concordia for the Lutheran World Relief. Also, a doctor in the congregation spoke to their fifth- and sixth-graders about INM and what he has seen in his career and on mission trips.

Partin even gave object lessons on how the disease of malaria destroys a body's red blood cells in a very impactful way. She "injected" disease -- in this case, a packet of baking soda -- into a "red blood cell" made of a tightly sealed sandwich bag containing vinegar and red food coloring. The result, of course, was the blood cell burst.

"We never forgot what we were doing," Partin said. "We had boxes everywhere; we kept it in everyone's thoughts."

Tupelo First United Methodist Church is a large church with membership around 1,600 people; however, they also do numerous missions projects throughout the year. Imagine No Malaria is just one of many causes the congregation supports.

"What I have personally witnessed," Partin said, "through all the missions giving, is our people are generous. Never once did I ever hear anyone complain, 'Here's another missions fundraiser.' People gave freely and abundantly, and it was humbling."

On the first Sunday of October, World Communion Sunday, the church's children made the announcement during all three services of how much the congregation raised for INM.

"Our sixth-graders held up the presentation check," Partin said. "It was awesome. It was important that this came from the children since it's saving the lives of children."

This church is in the Tupelo District, where Superintendent Dr. Jimmy Barnes has challenged the district's churches to provide 10,000 mosquito nets between now and the annual conference session in June 2017.  For more information about how to support INM and save lives, please contact Charity Gordon at inm@mississippi-umc.org or 662-825-0949. Charity would love to visit your faith community, small group, or church event and explain how you can also participate in the 2016-2017 Mississippi Conference Mission Focus, Imagine No Malaria.