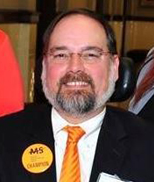 Scott Crawford (photo right) of Broadmeadow United Methodist Church in Jackson, MS gave remarks during disAbility Awareness Day at the Mississippi State Capitol on February 11, 2015. Crawford is a member of the board of directors for the Mississippi Coalition for Citizens with Disabilities. He is also the government relations chair for the Mississippi Division of the National Multiple Sclerosis Society. Crawford has multiple sclerosis and advocates for the disabled. Read his speech below.

I spent much of my childhood in Vicksburg, went to college at Millsaps, and then on to get my doctorate in Clinical Psychology at USM. I worked in Miami, with older adults and people with various forms of cognitive impairment, while teaching part time. In 1989, I came down with a rapidly progressive form of Multiple Sclerosis. It ended a career I was passionate about, one that I spent a decade of training to build.

In 2006, I returned to Jackson so I could be closer to my family. It didn't take long, however, to realize that I was needed here. With help from disability advocacy organizations, I was able to make my house more-or-less accessible, but the truth is, I can't get beyond my driveway without encountering obstacles that should have been corrected by the Americans with Disabilities Act, now a quarter century old. Yes, a generation has passed, and we've scarcely begun to come into compliance.

What do I mean? Well, when I got back to Jackson, the paratransit system was virtually nonexistent. We had a few broken down buses, not nearly enough for the thousands of people needing transportation in our Capital City. The fixed route buses were a decade old, with broken lifts that routinely left my friends and I on the side of the road, literally in the dust. It took litigation in Federal Court to motivate system-wide transportation reform here in Mississippi's Capital, so that people like me could get on the back of the bus. People like myself remain without transportation after 7 p.m. and on Sundays.

Jackson's sidewalks, where we have them, remain largely inaccessible to people with disabilities due to the lack of curb ramps and generally poor maintenance. The consequence of inaccessible sidewalks is that people like myself ride their wheelchairs in the streets with traffic (precisely how I get to church), with tragic consequences. In the past few years alone, we've lost three people using wheelchairs on the streets of Jackson.

Without such infrastructure, people with disabilities can't even BEGIN to consider employment, a social life, attending church, volunteering, or even taking care of their own basic necessities (e.g., grocery shopping). People with disabilities represent twenty percent of the population, but most of us will experience a disability during our lives. It's long since time for Mississippi to welcome and value all its citizens equally. We must make our story one about redemption!