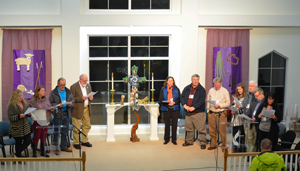 Photo below right: Bishop Swanson led the worship around reflections of Katrina.

As a former member of the Mississippi Conference Hurricane Katrina disaster recovery team, Larry Davis attended the Southeastern Jurisdiction Disaster Academy in Biloxi, MS.  Davis, who is the benefits officer for the Mississippi Annual Conference of The United Methodist Church, has not worked in disaster response for three years. 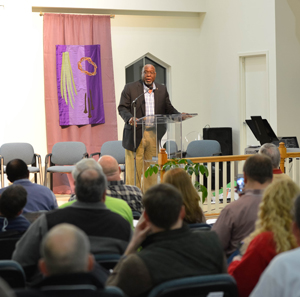 Mike Yoder, the disaster response coordinator for the North Georgia Conference traveled to Mississippi for the academy. He recalls making roughly 20 trips to Mississippi to deliver supplies after Hurricane Katrina.  Like Davis, Yoder was also inspired by the mindsets of the academy participants.

"There are people who want to be in the business of disaster response, who want to help the people on the street when they have a disaster...There are still people who want to do it because Christ tells them to do it," he said.
The Mississippi Annual Conference hosted the disaster academy alongside the United Methodist Committee on Relief (UMCOR) and United Methodist Volunteers in Mission (UMVIM). There were more than 150 people from about 20 states present.  Several workshops were provided.  UMCOR basic disaster ministry, cultural sensitivity, long term recovery group development and advanced disaster care management were just a few of the sessions offered to the participants. 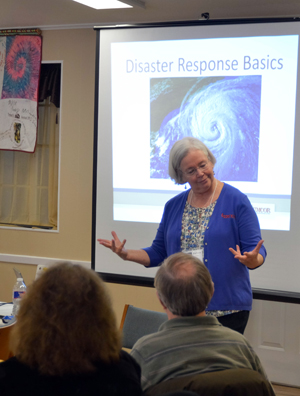 The Mississippi Conference director of connectional ministries and communications, Rev. Dr. Connie Shelton was grateful for the turnout.

"The strength of the Southeastern Jurisdiction partnered with UMCOR and UMVIM is a reminder of the power of the connection in times of disaster. One third of the participants were new to disaster response. The spirit of anticipation and expectation was palpable," expressed Shelton.

Mark Wall a member of Galloway Memorial UMC in Jackson, MS was one of the first-timers to disaster response. He shared, "I am richer spiritually and I have a greater knowledge of serving those in need during the trying times."

The year 2015 marks one decade since the tragedy and extraordinary generosity surrounding Hurricane Katrina's devastation.

To view media coverage of the Southeastern Jurisdiction Disaster Academy, click on these links: WXXV and WLOX.