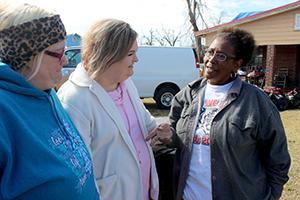 Photo below left: A view of Daniel Short's home following the tornado.

Photo bottom right: One of many buildings hit by the tornado at William Carey University. 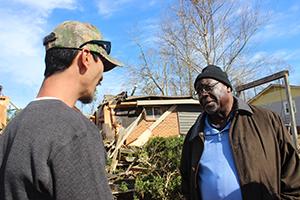 Cindy Ivey and Cathy Roberts laughed and cried together like longtime friends, but they have only known each other a couple of days.  Ivey is a disaster response volunteer with Asbury United Methodist Church of Petal, Mississippi. She was delivering meals to tornado survivors like Roberts who was clearing debris from her property.  In getting acquainted, Roberts revealed she was also United Methodist and a member of nearby St. Paul UMC. Grateful for the generosity of fellow Methodists, Roberts told how the high winds lifted her family from their beds.

"We are so blessed.  My husband was up and down the hall trying to find us.   We are so grateful for our lives.  We are not worried about where we go from here because I know God's got this all mapped out.  I truly appreciate the volunteers that came through," she said. 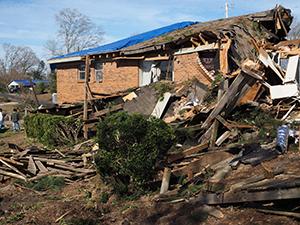 Dennis Miller, another survivor, estimated his journey to recover from the tornado may have taken several months, but thanks to United Methodist heavy equipment workers, he got a jump start.  Volunteers cut and removed several sizable trees from around his home.

"They are a bunch of angels. I think this is awesome what the church is doing because we needed it.  God is good, and I am still alive," said Miller who recalled his house rumbling and shaking from the tornado, but never lost structure.

Bishop Tours Tornado Damaged Communities
Bishop James Swanson Sr. of the Mississippi Conference United Methodist Church recently toured the destruction. Members of the United Methodist Committee on Relief (UMCOR) joined the bishop.  One of their stops was at the heap of debris that was once home for Daniel Short, his wife, and two kids.  The family survived the tornado in the bathroom.   Short said he had been turning away help because he had insurance. However being displaced for nearly a week and the mound in his yard untouched, his emotions were high.  So, he graciously accepted the Methodist offer to assist him with clean up.  Short added that encouraging words from the Bishop was valuable too.

"It's a blessing when people come out and are willing to help. It makes it a little easier. It was going to be hard moving this myself.  God bless everyone who has come out to help us," Short stated. 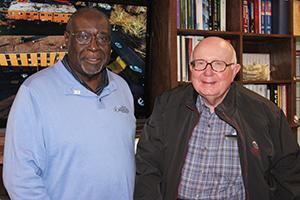 Swanson also visited the Edwards Street Fellowship Center, a mission of the Mississippi Conference. The center is about 1.4 miles from where the tornado hit.  It exists to serve the low-income families with a food pantry, a non-emergency medical clinic, and a thrift store. The facility was not damaged but lost electricity.  Not knowing how long the power would be out, workers quickly distributed perishable food items to feed storm victims.

Since the power restored, businesses and schools have been non-stop with replenishing the center's resources with more than 20,000 pounds of food, cleaning supplies and household items.  Ann McCullen, the executive director at Edwards Street, said that the response from United Methodist churches has been phenomenal. 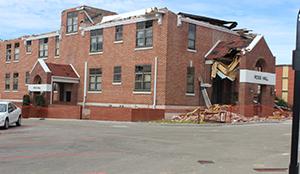 "It just touches our hearts to see the power of our Methodist connection live out, and it is so comforting because you know you are not in this alone.  You know that there is a  whole denomination out there that you can turn to," McCullen explained.

The bishop's tour included meeting with the president of William Carey University and a golf cart ride through campus to see the tornado's impression that was campus-wide.