Rising Above the Ashes 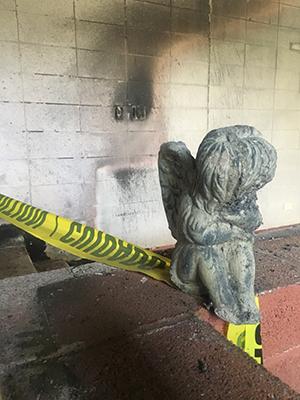 Photo below right: Paige Snyder worked at the weighing station in the Stop Hunger Now assembly line. She said her church has always been a happy place.

Photo below left: Pastor Roger Shock gives a high-five to the children enrolled in the church daycare program.

Corinth First United Methodist Church is extending generosity at a time when people might excuse the church from doing so because of its challenges. In mid-March 2016, a fire nearly destroyed the church.  To date, the sanctuary is the only portion ready for use.   The huge fellowship hall and Sunday school rooms were severely damaged forcing the church to use Corinth City Hall and the Merchants and Farmers Bank for meeting and administrative space.  The church's daycare to 90 children relocated to nearby Christ United Methodist Church.

Still, during a recent Sunday service, eight local charities benefited from a $10,000 gift the Corinth First UMC congregation collected.  That same day, the church wrote a check for $9,700 towards the Mississippi Conference mission shares. Members also blessed 50 buckets packed with cleaning supplies for United Methodist Committee on Relief to give to flood victims. In the following days, they even partnered with Christ UMC to packed 10,000 meals for the hunger relief agency, Stop Hunger Now. 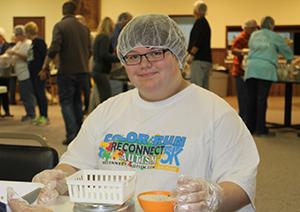 For those surprised by their giving, chances are they don't live in Corinth, Mississippi. According to Pastor Roger Shock, people in their city know the heart of Corinth First UMC.

"I think they'd be surprised if they didn't give because it just the nature of this congregation. Deep down this is a good bunch of people, very generous," he stated.

The youngest members of the congregation are living out the spirit of generosity as well.  Paige Snyder, 14, participated in the meal packing event.  The gathering was her second missions opportunity.  Her first experience was bittersweet because the fire broke out on the morning the youth was departing to weed grounds at a Wesley Foundation.  Nevertheless, the fire did not snuff their plans.

"My first reaction was shock.  I've been at this church all my life.  We had the fellowship hall for a long time and losing it has been tough. We've lost things, we've gotten new things, but through it all, we never lost our faith.  We are here to help," she said. 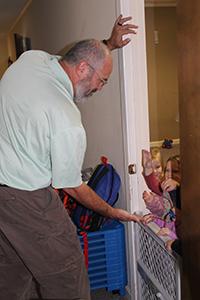 The Rev. Stephen Ludlam is the pastor at Christ UMC.   He said partnering with Corinth First UMC in their time of need, has opened the doors to other possibilities of the congregations collaborating.

For Dave Jennings, the song "He is Faithful to Me" comes to mind as he reflects on Corinth First's position.  He is a member of the local Baptist church but considers Corinth First his church too as he serves the congregation from time to time to direct the choir.

"I think many of our members are faithful.  They've kept up their attendance. The giving is up. He's been faithful to our church no doubt about it, and that is something we can't forget.  The church is fun.  It is active. It is living and sharing the word of Christ throughout this community," Jennings explained.

"These people are incredibly generous and if they believe in the cause, and they believe in the pastors, and what is about to happen, they will give. They want to be a part of building the kingdom and so they have stepped up and done some neat things."