Submitted to The Circuit Rider 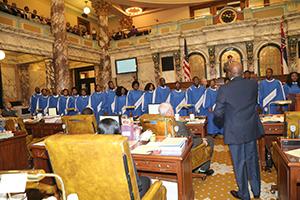 Photo right: The Rust College A' Cappella choir was present when Mississippi lawmakers presented a joint resolution to Rust for its 150 years of service in March 2016. Photo courtesy Mississippi Conference Communications.

There are more than 100 historically black colleges and universities, better known as HBCUs; across the country. In the late 1800's more than 4,000 HBCUs were formed through the South. While the majority of institutions sustained for a few years, few of these schools grew to be well-known institutions of higher learning, producing some of the nation's most successful black professionals. Rust College is one of the 11 United Methodist-related Historically Black Colleges and Universities supported by the Black College Fund.

The year 2016 marks a milestone for Rust College. Rust is celebrating 150 years of excellence. A celebration for Mississippi's first Methodist institution and first private "historically black" college. Founded by the Freedman's Aid Society of the Methodist Episcopal Church, the school was organized by missionaries from the North. They paved the way for adults and children to learn how to read and write.
(Click here to view the events scheduled for Nov. 6 - Nov.13 commemorating Rust's 150 years of service.)

The Sesquicentennial 150th year is a time for friends, alumni, students, faculty and staff to honor the proud history of Rust College, celebrating its past, present, and future.

Rust has become an international leader in teaching, learning, extension service and research. The founders started the University with a vision for innovative education, and opened in 1866 accepting adults of all ages, as well as children, for instruction in elementary subjects.

In 1870, the school was chartered as Shaw University, honoring the Reverend S.O. Shaw, who made a gift of $10,000 to the new institution. In 1892, the name was changed to Rust University to avoid confusion with another Shaw University in Raleigh, N.C. The new name was a tribute to Richard S. Rust of Cincinnati, Ohio, Secretary of the Freedman's Aid Society. In 1915, the title was changed to the more realistic, Rust College.

A significant change in the administration of the institution took place in 1920 when Dr. M.S. Davage became president, the first African-American to hold that position. Dr. L.M. McCoy (1924), his successor, was the first alumnus to serve his Alma Mater as president. He was followed in 1957 by Dr. Earnest A. Smith, an alumnus, class of 1937. In 1967, Dr. William A. McMillan, a non-alumnus, assumed the presidency. In 1993, Dr. David L. Beckley, an alumnus class of 1967, became the eleventh president of Rust College.

Rust's history and rich tradition of excellence have led to approximately 20,000 former students gracing the institution's hall; many completed only their elementary or secondary education. However, more than 7,500 have graduated from the college department. Among these alumni are leaders of the United Methodist Church and other church denominations, public school teachers and administrators, college presidents, lawyers, physicians, businessmen, government leaders, and ministers. Rust has improved the world and touched countless lives.

The Rust College family can take pride in knowing that the college will continue to build upon previous successes as it approaches the next 150 years.

Rust invites their entire family to celebrate their achievements, The Bearcat spirit, and the triumph of 150 years.