Key Celebrations Ahead for Gulfside Assembly 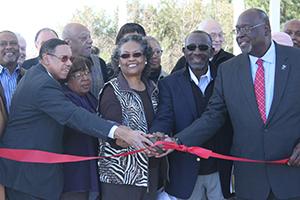 Planning is underway for special events to celebrate the United Methodist retreat, Gulfside Assembly in Waveland, Mississippi. The occasions will take place April 28-29, 2017. A gala honoring Gulfside's 94 years of service and a celebration of Gulfside's designation as a Heritage Landmark of The United Methodist Church are scheduled.  Founded in 1923 by Robert E. Jones, the first Black Methodist Bishop, Gulfside Assembly was the only place that African Americans and their friends could meet for spiritual, educational and recreational retreats. Hurricane Katrina destroyed the site in 2005.

The story below about Gulfside Assembly is an excerpt from the article "GC2016 to consider 3 sites for Heritage Landmarks" by Maggie Hillery, a correspondent for United Methodist Communications.

Gulfside Assembly began in 1923
Gulfside Assembly's contributions served thousands before Hurricane Katrina in 2005 destroyed every building on its grounds. Rebuilding to serve the future as it served the past is now front and center for the association that oversees the Waveland (Mississippi) site.

Founded in 1923 by Bishop Robert E. Jones, the first African-American bishop of the Methodist Episcopal Church. Gulfside Assembly began its life as a place where African Americans could gather in what was then a strictly segregated South and segregated Methodist Episcopal Church, South. During its lifetime, Gulfside served in many capacities as a training center, meeting place, planning center, overnight lodging for African Americans and a simple gathering place where African American and white citizens could come together.

Thurgood Marshall, a NAACP lawyer who later became the first African-American justice of the U.S. Supreme Court, and his associates used Gulfside to plan strategies for legal actions to end segregation at the University of Mississippi Law School.

In March 2016, the Gulfside Association dedicated an open-air chapel to the late Bishop Leontine T.C. Kelly, the denomination's first female African-American bishop. The chapel is the first structure to go up on the site since Katrina's destruction in 2005.

"We are clear about one thing as a board and that is, haste will not resurrect what we have to do," the Rev. Elijah Stansell of the Texas Annual Conference told that gathering. "We have a huge task before us. We are going to take it slow, and we're going to work it meticulously. What we need from you are your fervent prayers and confidence in us that God is not finished with us yet."

"Gulfside is a proud part of the history of The United Methodist Church -- a historic and heritage landmark and a present part of our history. Its existence is still a physical story of a checkered past in racial matters of a great denomination, but [also] a place that has provided dynamic and effective ministry for black people and the whole church throughout its history." - From the application for Historic Landmark status.