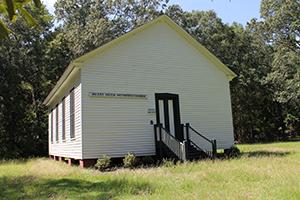 A Heritage Landmark is a structure or location specifically related to significant events, developments, or personalities in the overall history of The United Methodist Church or its antecedents. The Pearl River Church recognition was recommended by the UMC General Commission on Archives and History and approved at the 2016 UMC General Conference which met recently in Portland, Oregon.

From its simple beginnings in 1833 as a school and church for its area, Pearl River became a launching point for missionaries who ventured as far away as China and Japan and for generations of Methodist ministers throughout the world. Its history is intertwined with the Lambuth family, which has been a part of the growth of Methodism and for which Lambuth University, and Lambuth Inn at Lake Junaluska, North Carolina, are named.
Pearl River Church is on land located near the Natchez Trace, which first belonged to Native Americans of the Choctaw nation. It was deeded to the Methodists in 1833 for a school, church, and meeting place.

For several months during the civil war, the family of Mary I. McClellan Lambuth and James William Lambuth, medical doctor, minister and missionary to China, came back to Madison County and attended his home church while on respite from missionary work in China. During this stay, one of their young daughters died and was buried in the Pearl River Church Cemetery. Many Lambuth family members have been laid to rest under the majestic oaks adjacent to the church.

At the Oct. 6, 2016, service, the General Secretary of The United Methodist Church Commission on Archives and History, Rev. Alfred Day III, will bring the missionary address to the Lambuth Day audience and present the Heritage Landmark designation. Cemetery tours before the service and refreshments on the church grounds afterward are hosted by the Pearl River Church Historic Council and Madison United Methodist Church. The public is invited to attend.
"One of the great missionary families in World Methodism is the Lambuth family of the Pearl River Methodist Church in Madison County, Mississippi. Five generations of missionaries have made outstanding contributions to world Methodism, spanning over 150 years. In addition to the family's connection to the church and adjacent cemetery, the site has been a Methodist preaching place since the frontier days of the 'Old Southwest' having been established as a church, school, and meetinghouse prior to 1830, deeded in 1833. It is located near the historic Natchez Trace, a main transportation artery from Nashville to Natchez in the 19th century and now a well-traveled Parkway of the U.S. National Park Service."   -- From the application for Heritage Landmark status.

Gulfside Assembly, a second United Methodist site located in Mississippi, was also designated a UMC Heritage Landmark at the 2016 General Conference in Portland, Oregon.  In an upcoming issue, The Circuit Rider will highlight Gulfside Assembly service before Hurricane Katrina destroyed every building on its ground  in 2005.