Living Out The POWER of We 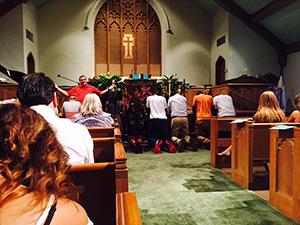 Photo right: Far right dressed in red, the Rev. Trey Harper led the prayer over students from around the community seen kneeling at the altar.
Photo below right: The annual Blessing of the Bearcats is a back-to-school event at Forest UMC for students and the community.  This includes worship and meal time.

Mississippi Conference United Methodists are being asked to read Acts 1:4-8 and lay heavy emphasis on the word, POWER. The refresher is needed as the conference transitions from the theme The POWER of We to Living Out The POWER of We.

The POWER of We teachings focused on the Core Values of the Mississippi Conference: love, generosity, justice and apprenticeship. On this new journey, Living Out The POWER of We, members will be coached on loving, learning, and leading as presented by Spiritual Leadership Incorporated (SLI). 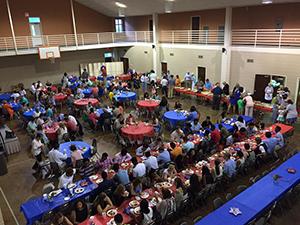 "This is an offering for those who are tired of church membership and desire true discipleship," according to Bishop James Swanson Sr., of the Mississippi Conference.

Described as a process and not a program, through loving, learning, and leading, members of churches and other organizations first grow in their faithfulness to God and then their fruitfulness for God. The latter is accomplished by learning the language of leadership and a set of cutting edge tools and processes for leading. The next move is applying this learning through leading the organizations of which they are a part.

Several Mississippi United Methodist communities have embraced loving, learning, and leading. Beginning with this issue of The Circuit Rider, read about their experiences in the series Living Out The POWER of We. This issue's story comes from Forest United Methodist Church.

For one year following the first Sunday worship service, the Vision Team at Forest United Methodist Church met for five hours. The team has no authority or place in the regular structure of the church. The group simply spent their time in prayer, study, and reflection of the life of the church.

"When we (Forest UMC administration board) first approached these people, we told them we are asking for a commitment like they have never been asked of before," said Rev. Trey Harper, pastor of Forest UMC. The church is located about 50 miles east of Jackson, Mississippi. Harper is a part of the Bishop's Operational Team for the Mississippi Conference of The United Methodist Church. He serves in a similar role as the Vision Team but on a conference level. It was his witness to the process loving, learning and leading that lead to the formation of the Vision Team.

Loving together
At the start of worship, the floor is open to anyone at Forest UMC to share where they see God at work in their life and in the lives of others. Their testimonies are called Glory Sightings according to the Mississippi Conference teachings on loving.

"Our entire congregation is really going through the loving part without realizing that anything has changed...It has been a process getting people to feel comfortable enough to say something, but even more importantly, opening up to realizing how God is moving," said Harper.

The church's Vision Team also reported Glory Sightings during their meetings. Harper said that revealing these in addition to concerns and burdens, encouraged the team to bond. They were open and honest in their discussions, and their disagreements were not perceived personal.

"When we leave the room, we are not mad at each other...We are not getting on the phone talking about how we can't believe that a person doesn't agree with us," stated Harper.

Learning together
Thirty-five-year-old Andrew Chambers is a lifelong member of Forest UMC. He is raising his own family of three in the church. His parents and brother are still active members. Chambers said he welcomed the opportunity to serve on the Vision Team of eight and was prepared for the tasks required of him.

"It was work. We always had packets of information. We read two books. There was homework. We read article after article, so it was in depth," Chambers explained. The small group read material on church leadership and church mission.

As a result of their learning, the team developed a Mission Action Plan (known as the parent MAP). Each church committee chairperson was also presented the MAP and was encouraged to create what was named a child MAP for their ministry. The MAP provided the vision for the year. These recommendations were later shown to the congregation along with demographics of the community through MissionInsite.

"We didn't have any push back...The vision process has really opened the eyes of our congregation to see that we don't offer a lot to other people outside our congregation. We tend to take care of each other. It (MAP) calls you out in a way..." said Chambers.

Leading together
Moving forward, the church decided to let go of its annual Halloween event to build on its back-to-school affair. It is the only one of its kind offered in the community. For Halloween, they have planned to support one of the local ministry celebrations.

Missions at Forest UMC changed too. The church discontinued sending checks to as many as 20 organizations to implement a three-mission focus. Resources have been directed to Trinity Mission Center (a predominately Hispanic community), Methodist Children's Homes of Mississippi, and missions in Belize.   Consequently, mission work at Forest UMC has changed from being only something to donate money to into something that people can donate themselves and their time.

Through loving, learning and leading, members are prayerful to attract more disciples of Jesus of Christ for the transformation of the world.

Living Out The POWER of We in Mississippi means loving, learning, and leading that is rooted in Love, Generosity, Justice, and Apprenticeship.