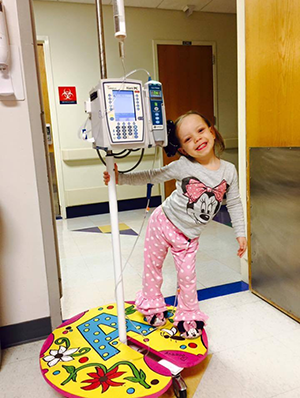 Crawford Street United Methodist Church, located in Vicksburg, Miss., is reaching out to the children at Blair E. Batson Children's Hospital by creating lily pads for pediatric patients to ride. The following story is shared courtesy of 'The Vicksburg Post,' by John Surratt.

In an activity room at Crawford Street United Methodist Church, a group of women assisted by a few children, have been spending their evenings decorating lily pads.

But these pads are not the flat green disks people see floating on a pond or lake that are usually the landing spot for an occasional frog or dragonfly.  These pads are wooden disks 26 inches in diameter to help young cancer patients be mobile while they stay in the hospital to receive chemotherapy.  They allow a child to safely move around their floor with their IV pole.
The group's goal is to decorate 12 pads and deliver them to Batson Children's Hospital in Jackson.

"We hope to have one for every IV pole on 3C and then, eventually, one on every IV pole at Batson.  We're hoping others will see the lily pads and make them.  We will leave the pattern and instructions at the nurses' station.  They are really easy to make and fun to decorate," said Wanda Cook, whose granddaughter, 4 year old Analiese Cook, is currently receiving treatment at Batson for leukemia.

"We already have offers of help from a 4-H club and a Boy Scout troop,"  explained Robyn Lea, who is also involved in getting the lily pads to Baton.
The idea for the pad began with Cook's desire to make Analiese's stay at Batson more pleasant.  "The children want to get out of their rooms but the chemo makes them weak.  If they get out of bed, the IV pole has to go with them -- so I was looking for some way to get her moving around with a fair amount of ease."  Currently, when the children want to get out of bed, they sit in a wagon and someone pulls the wagon.  "Actually, it takes two people; one to push the pole and another to pull the wagon," said Cook.

"You're walking and walking around the unit because the kids don't want to go back to their rooms," Cook said.  Thinking there had to be a better way, Cook talked with her friend, Robyn Lea, who began researching alternatives and came across a facebook entry about a high school in Auburn, Washington, that made pads for a children's hospital there.  The idea for the pads came from a student who was a cancer patient.

"I called the shop teacher at the school and asked about the pads.  The teacher sent the copy of the pattern and explanation for how to cut the wood.  I then spoke with the President of our United Methodist Women's group at our church, Linda Turner.  Linda knew just the right person to help us and that was Lewis Decell," said Lea.

Decell cut one lily pad and Cook took it to the hospital.  "When we first took it up there, it was just a piece of plywood with no decoration on it at all.  We put it on there to see if she would like it and she did," explained Cook.  Lea showed a video of Analiese standing on the pad smiling, holding her IV pole and waving to the nurses as she passed the nurses' station.  "The people who saw it -- just plain wood -- said-we want one," said Cook.

That set the wheels in motion for the project and Decell cut 12 more lily pads.  They are made from ½-inch plywood using a bandsaw.  Some of the finishing touches are cut by hand.  Each pad has a slot down the center which allows it to slide easily onto the IV pole.  The child can sit or stand on the pad and be pushed along.

"The original pattern called for a smaller disk, but the IV poles at Batson are larger so these disks are 26 inches," said Decell.
After the disks are cut, they are painted and sealed with several coats of polyurethane, for infection control purposes.  The decorations have no set pattern, allowing the workers to use their imaginations to paint the pads in an assortment of colors and designs from stripes to animals and flowers and blocks of solid bright colors.

Wanda Cook said, "We want them bright and cheerful!"

Once delivered, the pads will remain at the hospital, except for Analiese's, which she will take with her when she is admitted.  It was "custom" decorated for her by her grandmother, Wanda Cook.

And when this first batch is completed, will there be another dozen in the works?

"We hope other individuals and organizations will take this idea and run with it.  In order to get a lily pad on every IV pole at Batson, it will take the efforts of many people," Lea said.