The Harry Denman Evangelism Award is a prestigious recognition presented to youth, laity, and clergy who make a difference within the lives of those in their congregation and their community. This award has been presented annually for over 30 years and is given in honor of Harry Denman, the founder of The Foundation for Evangelism. The 2015 award was given to Rev. Michael "Doc" Shelton (clergy), photo below right (blue shirt), Turner Arant (laity), and Julia Holland (youth). The recipients of this award practice the Great Commission.
Rev. Shelton is a man who comes from modest beginnings. Growing up on a sharecropping farm, he has said he never went without what was important in life. "We were raised in an abundance of love," he describes of his childhood, "we might not have had much, but we always had love."

When he was called to the ministry Shelton knew that this would be a lifelong job saying that as long as he is able to do ministry and help people, he plans on doing it. Shelton was nominated by Rev. John Moore, the recently retired district superintendent of the New Albany district. In his letter of recommendation, Moore compared Shelton to Denman in that both men reach beyond the congregation to help others. Moore goes on to describe Shelton's "Meat Market" ministry, where Rev. Shelton spoke to people while they were shopping in the grocery store and listened to them when they needed someone to talk to. 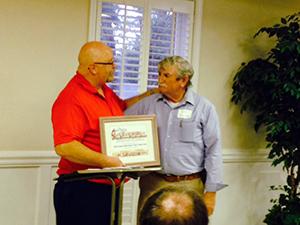 When he won the Harry Denman award, Shelton was shocked that he was awarded such a great honor. "I look around and think that someone else was more deserving," he said while describing that winning this award was very humbling to him and he accepted it for every minister around the world that stands for the cause of Jesus Christ.
The Harry Denman award is open to youth, laity, and clergy. If you know someone who exemplifies the legacy of Harry Denman, exhibiting outstanding efforts in Wesleyan evangelism by faithfully carrying out the mission of "making disciples of Jesus Christ" please put forth a nomination. You may find nomination information at:  www.mississippi-umc.org/2016awards. Nomination deadline is May 1, 2016.
To read more about Harry Denman, click here.