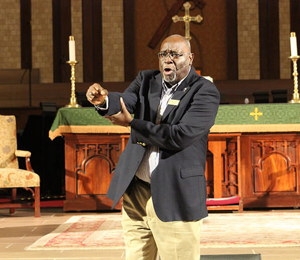 Photo right: Bishop James Swanson Sr. gripped his arm to describe pruning during his message to laity and clergy on becoming fruit-bearing churches.

Photo below right: All four members of the SLI team seated on the front row.

There is a real hunger in the Mississippi Conference for figuring out how to make disciples, according to Ideal Curtis, a member of the Spiritual Leadership Incorporated team. Recently, they were in Mississippi to introduce laity and clergy to a new model for ministry fruitfulness -- Loving, Learning, and Leading. Their presentation was the focus of the annual Collaborative Leadership Conference.

"You can tell that people were here because they wanted to be. They were really invested in what the next step is. Sometimes we have people come for lots of reasons, but you don't feel that energy," said Curtis who led one of the three breakout sessions offered to the participants.
Nearly 500 members of the Mississippi Conference attended the all-day meeting organized through the Office of Spiritual Leadership, directed by Rev. Larry Hilliard.

"It has been a great turnout. Every area (district) represented well. There seems to be a good buzz about the event. We hoped that clergy would bring more than just one person from their church and they did," said Hilliard.

The Greenwood District had the largest presence of laity and the Meridian District had the most clergy present. Both districts were recognized by Mississippi conference lay leader Timothy Crisler who stated, "We encouraged attendance and we were blessed. Our emphasis was on collaboration and in their way, these districts displayed that. At the end of the day, we, as a conference are stronger because of each district and every person who cared to hear about Loving, Learning and Leading."

Spiritual Leadership Inc. (SLI), focuses on developing spiritual leaders who model a community that loves, learns and leads together, creating environments that foster transformation, and establishes processes that bear fruit. Within this process churches grow in their faithfulness to God and then their fruitfulness for God.

Brenda Jefcoat, a certified lay speaker from Lauderdale United Methodist Church attended the gathering wearing a t-shirt branded with the Mississippi Conference theme --The POWER of We. She said SLI made her even more excited about the direction her church is headed.
"This was very informative. I was given some ideas we can begin in our church to make it more interactive with our young people as well as our seniors to make disciples of Jesus Christ. Our pastor really has a positive influence on us and wants to get us involved. He has a heart for the lay servants. We are having a good time, all laity should be here," said Jefcoat.

Organizers made it clear that the SLI model was not a program, but something they wanted to offer churches. The process has already been adopted by groups in Mississippi Conference. Starkville District superintendent Rev. Dr. Embra Jackson and fellow Cabinet members are more than a year into the practice. He remains enthusiastic over the results and looks forward working with the churches in his district.

When asked about resistance to the model, Jackson said, "If you are a pastor who is used to the traditional style of leadership where you are the main person, it is going to cause you to rethink some things because this is collaboration between lay and clergy."

Bishop James Swanson Sr. preached the closing worship with reference to John 15. Swanson reminded the congregation all efforts are fruitless if they only begin with "ourselves." He added, "I think that is the heart of what you have learned here all day long and if you have not heard that then you need to do what a friend of mine use to say to me back in Georgia and that is, 'You need to go and come again.'" Swanson also commended clergy and laity for the great turnout and challenged them to exceed a head count of 500 next year.

A feedback form that was collected at the end of the conference will shed more light on what people thought about the conference. To view pictures from the Collaborative Leadership Conference 2016, click here.