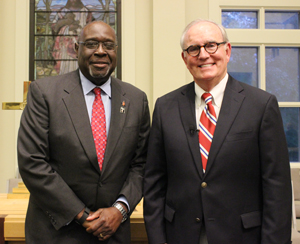 Recently, dozens of people filled a room at Parkway Hills United Methodist Church in Madison, Mississippi for a presentation by the once famed attorney, Richard "Dickie" Scruggs. He is also considered Mississippi's richest man. Scruggs was at Parkway Hills to inform the group about Second Chance Mississippi, an adult education program he started as a result of his experience in federal prison. He was incarcerated after pleading guilty of conspiring to bribe a judge in 2008.   An internet search of his name revealed the dark details of his crime and words like "ruthless" to describe his actions. In September 2014, Scruggs was released from jail yet another word beginning with the letter "r" to define him -- redeemed. 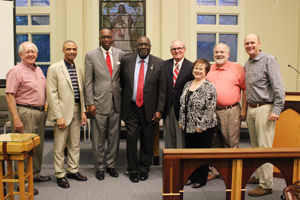 "People who care about it (the case) have pretty much made up their minds about just how guilty I was and I plead guilty so I am just going to let it stay there. I regret that I made the decisions I made, said Scruggs."

Mississippi Conference Bishop James Swanson Sr. attended the gathering at Parkway Hills.   He was introduced to Scruggs a few months earlier. Swanson said they talked about Scruggs' job behind bars. He taught math to other inmates who had difficulty passing the General Education Development (GED) exam. They also discussed Scruggs' desire for the reportedly 500,000 adults in Mississippi without high school diplomas to earn their GED as well.

"I told him that I don't think God meant for you to go to prison but God will never be outdone. If we foul-up God's plan A, God always has a plan B. So, in the midst of that, God took what looked like a bad situation for you and not only redeemed your life, but now using you to redeem other people's lives," said Swanson.

During their initial meeting Swanson also suggested Scruggs involve the church in his mission. It was an idea that Scruggs and his team implemented, making their first speech before a faith community at Parkway Hills.

"I think the churches can identify people in their congregation or people their congregants know who would be good candidates for a Second Chance, and the churches sponsor them. By that I don't mean give them a full ride, but to help them over any financial hurdles that come up along the way that might cause them (candidates) to drop out again," said Scruggs.

With a fresh outlook on life, Scruggs travels Mississippi raising awareness and funds for Second Change Mississippi. He's partnered with the state's 15 community college districts. He said the money received for the program goes directly to the Mississippi Community College Foundation earmarked for adult education and GED.

At one point Scruggs said he wondered how people would receive his mission following his fall. To his surprise, they have helped him press forward.

"Nobody has said a thing to me other than keep going. I haven't heard a single negative comment but that doesn't mean somebody has made one. I have not had anything but encouragement from everybody that knows about this," stated Scruggs, a man with a new purpose, thanks to a second chance.