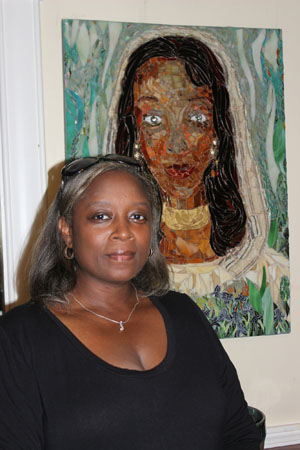 Photo right: At the age of six, Sheila Malone was inspired by her grandfather to become an artist.

Photo below right: This is an image of Tamar.

Photo left: The image on the far right is of Ruth.

The year 2012 was a period of soul searching and healing for Shelia Malone of Madison, Mississippi. She was undergoing counseling for post-traumatic stress related and needed a way to get past what she calls her "stuck point" to communicate her brokenness. Malone, a wife, a mother, and a gifted artist found her voice through broken glass and women of the Bible.

"I realized I could communicate what I was feeling by relating to these women and their stories in the Bible and drawing their strength. It was totally a God thing, how it all came together with the art, because I have never done anything like this before... I have always painted, sketched or sculpted," she said.
That year, Malone began producing colorful mosaics of women in the Bible and named the series "Redeemed." 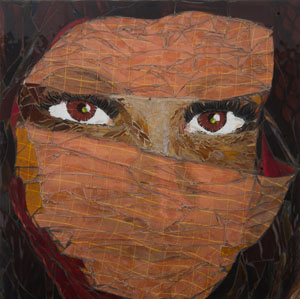 "The fact that I was taking broken pieces and putting them back together to make something new, better and beautiful, I can relate to that. I felt like that was what I had been through. I was broken and some very kind people helped me put myself back together."

Malone said the eyes were the starting point for each piece. She explained her process while discussing her labor representing Tamar.

"The eyes, for me, communicate, convict, or tell a story that your body language or your words can't communicate. I can get a feel for a person's mood or emotion through their eyes. With Tamar, I used a green (emerald) gem in each eye. Usually in art, green is used to symbolize envy or deception, but in this case, it was not her deception that her eyes were reflecting, it was Judah's. He had withheld from her from what was hers by right according to the Jewish law." 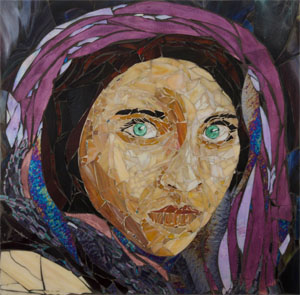 Malone was also suffering from insomnia when she began the "Redeemed" series. She composed the visuals in her home studio, often at the night, following a full day of working her full-time job and caring for her family. Looking back, she believes her disorder was also a flow of the Spirit.

"I had insomnia a full year. This is what I did when I couldn't sleep. I don't know what kept me awake. Some people say God speaks to us when we can't sleep at night. Well, he (God) talked to me for a year and this is what resulted."

Malone has produced eight illustrations of women of the Bible and estimates each one took her more than a month to complete. She feels this particular series was never meant to be commercialized but to be used to spread the Gospel and help others spiritually. Malone has triumphed over her past and frequently makes presentations on how she accomplished this.
Malone is member of Madison United Methodist Church in Madison, Mississippi and once served on the Mississippi Conference Board of Pensions. For more information about Malone go to www.grangerstudios.net.